The Chamber of SQL Part 3 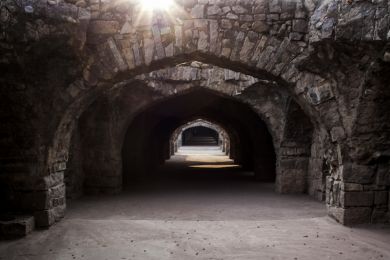 “The Always Highly Available Failover Cluster On Instance”. The project Stephanie was working on was nearly finished. Her new architecture was built, scripts were being created and databases were migrated. She was doing a wrap up for herself. It had been a great experience, working with Richard and Marc. Two people she would not soon forget. She had learned a ton of new things from them. On her way to the machine pouring black gold, she heard on of the developers talking about Always On. She stopped and eavesdropped. Technically it was not eavesdropping as the developer was sitting in the middle of the room talking loudly.

She listened for a while and interrupted him. “Dave, sorry to interrupt but I think you’re mixing up two things here.” Dave stopped and said: “Oh really, yeah well, I’ve never quite understood the differences actually. I’m not a DBA kinda person.”

Stephanie chuckled: “haha, that is happening al the time. I’ll explain you if you want.”
“Ow yeah sure thing”, said Dave. He always loved it when Stephanie was explaining something.

“Ok here we go”, Stephanie said. She picked up a white board marker and started her story. After one sentence she stopped. Be right back she shouted and vanished.
2 minutes later she arrived with a big cup of coffee, no coffee no SQL she smiled.

What does Always On mean?
“Basically”, Stephanie started, “we have 2 different options under the umbrella what we call Always On. We have on one side Always On Availability Groups and on the other side we have Always On Failover Cluster Instances. Hence the confusion. Microsoft has put both solutions under the same name, but they are totally different when setting these up.”

Everybody with me, lets get into this.

Dave who was all ears nodded enthousiastic: “Yeah, that make sense. I’ve built a lot of those back in the early 2005 days. oh boy. ”

“Basically”, Stephanie said and sipped her coffee, “it boils down to this. In its simplest form for high availability, you have 2 separate SQL servers which are being installed. We put a Windows Failover Cluster on top of them to make sure they can communicate and we enable the Always On High Availability feature, but for the story, this is not important.

In this scenario, we have a primary replica and a secondary replica. In the end they actually act like two separate SQL servers. They have their own storage, their own jobs,… but what makes it a piece of art is the fact that we can group databases in an availability group and that we can query the secondary replica for read-only queries. We have a so called readable secondary.

“Euuurhhm”, Dave said, “how does the application know that the group just moved to the secondary replica as you call it…”

Creating a Listener
“Aha that, my dear Watson is a very good question”, Stephanie smiled. “We create a so called Listener. A listener is nothing more than a virtual name that will always guide you to the primary replica. He knows who is acting as primary and who is acting as secondary. We can even force read-only connection to always be rerouted to the readable secondaries. And with the introduction of SQL 2017 we can have up to 3 synchronous replica’s and we can even load balance among our replica!”

“Cool he! I could go on and talk for ages about Always On Availability Groups, but I really need to continue my script. I’m trying to automate a virtual machine deployment in Azure hence the amount of coffee I’m drinking today”, Stephanie said smiling.

“Thanks for the small update Stephanie”, Dave said and raised his cup of coffee!

See you all on a next adventure about the three headed dog called kerberos!